On Tuesday 5th November Sponne’s U14 (Year 9) team took part in the County Cup at Oundle after recently winning the qualifying County Plate competition. This competition is known for being very tough and usually consists of the large independent Schools.

Sponne had a tough start to the day against Wellingborough School in very heavy rain, Captain Lily won the toss and Sponne set off quickly to score the first goal. Unfortunately, the rain became heavier and the game slowed right down. Finishing 5-5 we headed into our next game soaked to the skin and very cold. The rain eased slightly and we were able to play some flowing netball, we made some silly errors due to the conditions but with our usual grit and determination we pulled together and won the game against Oundle 10-9. Final game of the day was against Northampton High School and with the first game ending in a draw we knew we needed to not only win but to build up a big goal difference to set ourselves ahead of Wellingborough. As predicted the girls pulled it out of the bag with a fabulous demonstration of teamwork and attitude, winning the final game 21-1

Sponne regularly qualify for these competitions but until now, have been unable to be competitive amongst the private Schools. This year the U14 girls were not only competitive but went on to win the Cup.

After speaking with the Northants Netball County Chair and the Director of Netball at Oundle they advised me that this hasn’t been achieved by a State school in as long as they can remember. As a result of this success the U14’s have qualified for the Regional Finals in Derbyshire on Saturday 25 th January.

Congratulations girls you have worked so hard for this. 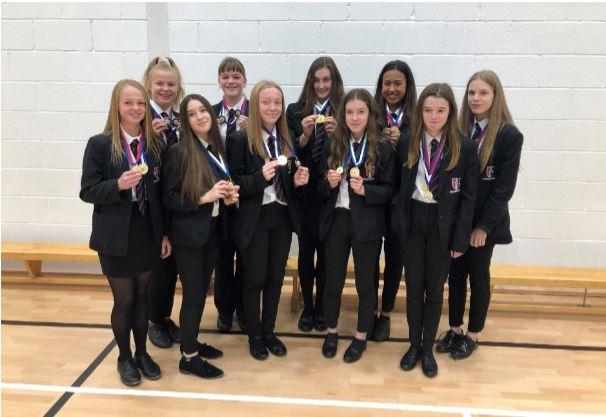